Experience the magic of a truly authentic Tuscan Lifestyle…

Become a Tuscany Insider during your stay with us…

Podere Spedalone is not a simple farmhouse, it is YOUR farmhouse, it is a place where you will feel at home, surrounded by gorgeous landscapes, pampered by a healthy and characteristic cuisine.

We have always tried to combine the privacy that all people seek with the conviviality that distinguishes us.

Podere Spedalone is surrounded by large green spaces where you can spend restful and relaxing days. The swimming pool is free for all our guests and our restaurant will surprise you every day with new dishes, cooked with local and meticulously selected ingredients.

What our guests appreciate the most is the conviviality of being together in common tables, always knowing new people and new friends.

We are just beginning our discoveries of Spedalone’s past…

THE ROMANS… From our research to date, we think that Spedalone began as a Roman settlement, around 600 AD. Already at that time, Spedalone was a farming community (in the excavations undertaken to restore the farm, we have found a few Roman glass and brick fragments).

The oldest existing part of the farm dates back to about 600 – 700 AD. It was most likely a lookout tower.

CHARLEMAGNE… The north, or “upper”, wing dates back to the Carolingian period (800-850). In 813, while travelling home to France from the papal coronation in Rome, Charlemagne camped with his army on the nearby plain of Castelnuovo dell’Abate. There, his army fell ill. During the night, he had a vision suggesting to him an infusion of local herbs which would cure his comrades.

Evidence of such infusion can be found from the herbs growing on the walls of Spedalone. Thanks to the infusion, Charlemagne’s men recovered, and in gratitude, he ordered the construction of the Abbey of Sant’ Antimo, which today is run by monks from Caen, Normandy. 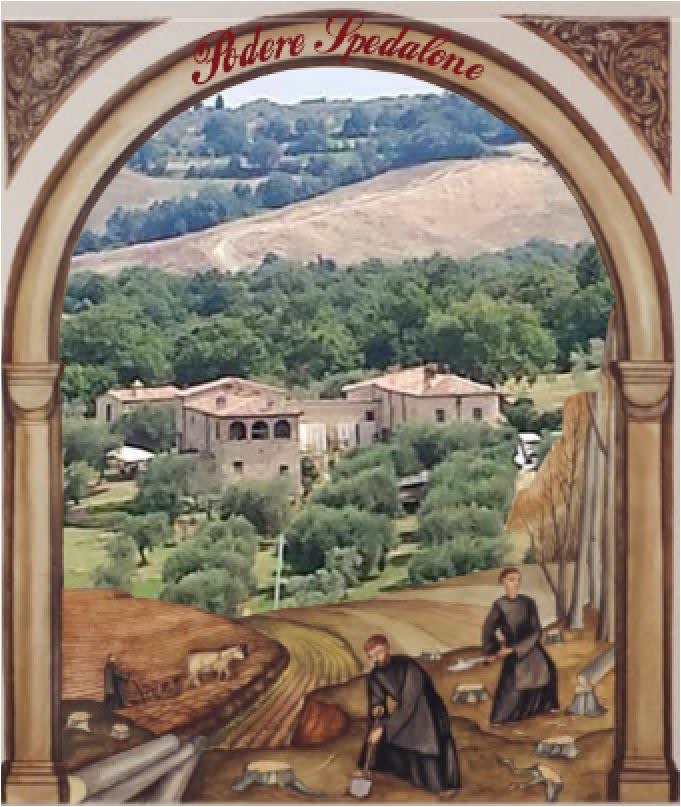 THE PILGRIMS… During that period, Spedalone served as a “Hospitalis Sancti Benedicti”, or rest stop, on the routes, known as the “Francigena”, for pilgrims traveling from France and northern Europe to Rome.

At the time, there were three great pilgrimage destinations: Rome, Jerusalem and Santiago de Compostela. Spedalone stood along a road originating from Buonconvento, which branched off in one direction towards Val di Chiana, past Podere Camprena, Santà Ambrogio and Palazzo Massaini, and in the other towards the Via Cassia, Podere Spissa, Pienza, Spedaletto and on towards Rome.

THE BENEDICTINES… In 1225, Spedalone is reported to have still been active as a “Hospitalis Sancti Benedicti,” run by Benedictine monks (see Maroni). By this time, it was a defensive structure, with high walls (which today are partly buried), and was probably impenetrable.

THE OLIVETANI… In 1381 the monastic order of the Abbey of Monte Oliveto began reconstruction of the Monastery of Sant’Anna in Camprena on the ruins of an old hermitage, and began to buy the lands around the monastery (See Libro delle Stime).

During this period, the two farms, Salvadominici and Spedalone were rebuilt, and an olive press and oil depot were added on to the tower of Spedalone’s upper wing.

During the same period, the dry stone wall terrasses of Spedalone were built and the olive grove was planted on the terrasses.

One can still see in the part of the olive grove below the road half-moon shaped dry stone wall terraces – very few of these remain in Tuscany today. (Listed in the leases in the copy of the Libro delle Stime).

Spedalone was renovated again in 1850 with the addition of the loggia and large wood-burning oven to the “lower” wing.

Until about 1960, three families, in all about 45 people, lived on the farm — two families lived in the lower wing, and one in the upper wing. They cultivated the land on the farm’s approximately 160 hectares, much of which remained forest. The entire ground floor of the farm building housed the animals, including work oxen, sheep and horses.

From then until now, the farm was used occasionally for social gatherings, but it was never abandoned.

From 2005 to 2006 the property was lovingly restored and transformed into a top class farm house resort maintaining the history of the property.

From 2006 to 2012 Podere Spedalone was opened as a premier agriturismo.

From 2012 to 2022 Podere Spedalone was rented and managed by Alessandro Capitoni, a local expert in hospitality and farming who successfully continued and grew the farm and hotel building a strong brand for Podere Spedalone’s unique and delicious Olive Oils, Saffron, Honey, breads and pastas, and meats.

From 2023 the farm and hotel is run by the owners with a new team of talented experts in farming, luxury hospitality, and natural foods and wines.

Spedalone is cited in “ The First Christian Communities and Roman Roads to Siena, Arezzo and Chiusi”, Alfredo Maroni, 1990, pages 78, 81.

If you would like to receive our newsletters with update, upcoming events and promotion, please sign up below

You can find out more about which cookies we are using or switch them off in settings.

Scroll to Top
× WhatsApp Us

Websites can store or retrieve information in the form of cookies in the browser.
These may relate to anonymous statistical information, information about the user, your preferences or devices used to allow a personalized web experience or to improve the experience of using the site.
We respect your right to the protection of your data, therefore, you can decide to block, accept or not accept certain types of cookies. For more information you can consult our Privacy Policy and our Cookie Policy
You will always have access to your data that may be stored on this site by accessing the page Privacy Tools < / a>

Strictly Necessary Cookie should be enabled at all times so that we can save your preferences for cookie settings.

If you disable this cookie, we will not be able to save your preferences. This means that every time you visit this website you will need to enable or disable cookies again.

This website uses Google Analytics to collect anonymous information such as the number of visitors to the site, and the most popular pages.

Please enable Strictly Necessary Cookies first so that we can save your preferences!